Immigration and the Invictus Threshold - The Final Debate 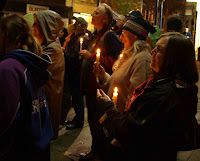 Last night I decided not to watch the final prime ministerial debate on TV. Seeing them debate might get in the way of discerning something I wanted desperately to grapple with.

For me, there was one key question to answer. Would any of the candidates cross the Invictus threshold? That is, would any of the them rise above the political cultures that produced them, bravely challenge perceptions at a crucial point in an election campaign, and make us all a little more than what we used to be?

Instead of watching TV, I took our poor dog for a very long walk and listened avidly to every word through my beloved IPhone. This little global device has been produced by an industry driven by the genius of the maligned: immigrants. Google, Yahoo, Intel and eBay all have one thing in common. They were co-founded by immigrants or the children of immigrants. Hotmail was co-founded by Sabeer Bhatia, who arrived in the US in 1988 with $200 in his pocket. Ten years later he sold Hotmail to Microsoft for $10 million.

Globally, the world's peoples are on the move. National responses to this global experience has largely stayed still. That lack of moving culturally on our part in the UK has been observed painfully in the context of our general election debates over the past few days.Immigration is back on the agenda in the most negative of ways.

Listening to last night's debate on the economy I thought over and over again of the piercing analysis offered regarding immigration by the Canadian-American economic genius, J.K. Galbraith. He knew how overwhelmingly advantageous migration was to economic prosperity.

'Migration is the oldest action against poverty. It selects those who most want help. It is good for the country to which they go; it helps break the equilibrium of poverty in the country from which they come. What is the perversity in the human soul that causes people to resist so obvious a good?'

Recently published reports have highlighted the value of migrants to our economy - especially in London where the Mayor has called for an amnesty for some of those who have worked in the UK without authorisation. Those who have cheated don't reflect the majority in our global experience of migration. The UN recently estimated that at least 85% of the world's migrants live and worked in host nations lawfully. So, what is the perversity in the human soul that causes us to resist so obvious a good?

Let me be up front. I wouldn't take too much issue with policies of the three main parties regarding strengthening our border controls or with the obvious need to "count them all in and to count them all out." As a citizen, I want my country to have safe borders and have managed immigration.

So, I listened...I thought all three performed well. To his credit, David Cameron has moved the Conservatives on from the horrible anti asylum vitriol of the Michael Howard era. He's also spoken well of the contribution of immigrants. I'll grant him that. But, it wasn't that difficult to improve on Michael Howard's stance on immigration. On the issue of tax breaks for the very rich,he wasn't anywhere near an Invictus threshold.

Gordon Brown also saw the economic advantage of attracting people our economy needs. For that and other issues around immigration he also gets some credit. I have a great deal of time for Gordon Brown as regards the economy. Most of us have prospered under his stewardship of it. As I listened however, I could almost discern an electorate hearing pertinent points but not really listening any more. I didn't see the final smile at the end of the debate: I merely heard it and felt a little sad.

To this immigration debate I bring a specific set of experiences. They relate to a small part of the much wider immigration story. Having worked closely with asylum seekers and refugees for over ten years, I have had cause often to criticise the Government for its treatment of displaced people and their children. I have also had cause to be grateful.

At the beginning of this century the major concern was the perfunctory exploration of cases that led to 80% of all asylum applicants being branded as cheats in the press. When their stories were explored with greater thoroughness, the number of asylum claims accepted could rise to some 40% with a further 10% being granted exceptional leave to remain because it was impractical or unsafe to return them home. The truth of it is, every year in the 1990s, Britain came ninth or tenth in the European league table of number of asylum applications per thousand of population. On a specific Welsh note, the placing of asylum detainees in places such as Cardiff Prison in 2001 was disgraceful. Regarding that matter, I would commend all the parties represented at the National Assembly for Wales. They made their concerns known.

The truth of it is the world suddenly became a different place after the fall of the Iron Curtain. New wars in the former Yugoslavia and parts of Africa caused a flood of refugees. So did the vileness of characters such as Robert Mugabe and Saddam Hussein. Handling such numbers wasn't easy for the Home Office. I am therfore grateful. The UK welcomed tens of thousands of vulnerable individuals who would otherwise have lost their lives.

I have many close friends who wouldn't be alive today if they had not been granted sanctuary in the UK. It is a symptom of that perversity in the human soul referred to by Galbraith that we cannot even now, in the context of three major TV debates, celebrate that obvious good we have done under the Labour government since 1997. I thought of the refugee doctors trained in Wales who are contributing so significantly to the NHS in the UK. It would have been so good to celebrate their achievement and contribution - and that of many others.

The Invictus meltdown during the final debate occurred for me when both Brown and Cameron turned on Clegg regarding the amnesty proposed for those migrants who have been in the UK for more than ten years. It was an easy hit to make.

Why the need for an amnesty? Listening through my IPhone I remembered the thorough investigative journalism of Nick Cohen in his Pretty Straight Guys in 2003. I also remembered the chaos around the immigration scene in 2000.

Ironically in April 1996, during Michael Howard's watch, the Home Office signed a Private Finance Initiative with the computer conglomerate, Siemens. New Labour took it over. To cut a long story short, the new IT system didn't work on time. As a consequence, mountains of immigration files were held in warehouses with data that should have been transferred to disks. Cohen records that the strain of coping with a wrecked immigration service was too much for many immigration officers: 363 resigned in 1998.

Clegg's words brought back memories. To the backdrop of the wars in the former Yugoslavia sending refugees flooding across Europe the UK immigration minister, Mike O'Brien, was admitting in the Commons that his department was receiving a daily average of 56,223 calls in June 1999. A mere 1,707 were actually being answered. By the beginning of 2000, the backlog of undecided cases was a staggering 98,000. Ten years ago, it sometimes took 28 months to decide some cases. Judges handling asylum appeals, according to Cohen, reckoned that seven out of ten found a legal or illegal way to stay. Beuraucratic chaos doesn't justify overstaying unlawfully but it does make it more probable. It also created a problem that needs to be solved.

Being brave enough to offer a one off possible solution to a specific legacy issue of illegal working and overstaying, that no-one else wished to highlight because it was too inconvenient a reality, commended Clegg to me. In this, he came closest in Thursday's debate, to crossing the Invictus threshold.

Why place such an importance on crossing such a threshold? It is because I am afraid as election day looms.

As an electorate, we have begun to discern that hard choices lay ahead of us. Sadly, the early signs are already there that we have begun to scapegoat and indulge an irrational fear of the weak, the vulnerable and the different. The Daily Mail hasn't moved on an inch from the time in February 1900 when one of its journalist watched some 600 passengers arrive on the British liner the Cheshire at Southampton. He saw an array of desperate Jews escaping the pogroms in Tsarist Russia and wrote viciously: 'These were the penniless refugees, and when the the Relief Committee passed by they hid their gold and fawned and whined.'

Was it the perversity in our soul last night that prevented us from even beginning to address the reality that throughout Europe during the recent recession, unemployment has been much higher amongst migrant peoples - those who have cleaned and built our buildings, served us in the hospitality industry, picked our crops, and cared for our infirm. They have also been less able to return money home, making the world's poor much poorer. The impact, for example, of Moldova's recent 37% fall in income from its diaspora is especially severe. Remittances are equivalent to a third of the country's national income.

As this election draws to a close over the next few days I will look anew at which party is most likely to enable the UK to become a little more than what it used to be. I'll also be praying...
Posted by Aled Edwards at 17:55 1 comment:

Aled speaking at an Obama for America event in Sonoma, California 2008.