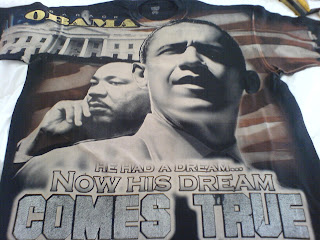 Hi everyone. Just a quick word to let all the Obama supporters back home know that I am really enjoying myself here in San Francisco as the clock ticks down slowly on the closing days of the US presidential elections.

This T-shirt belongs to my good friend Uzo Iwobi and I hope it will find a good home on the wall of the African Community Centre in Swansea. Uzo and I served as commissioners together on the Commission for Racial Equality.

Whatever others think. This T-shirt reflects the discernment of the vast majority of black Americans. I'm not taking that away from them after all those cruel years of history both American and British. I also remember the Welsh slave owners who gave so many black Americans names such as: Davies; Williams and Lewis.

This election is however far from over and the the Obama for America campaign is working hard for every last vote. I have never seen or experienced a campaign such as this. If this guy runs a country as well as he runs a campaign, America will be well served. So will our world.
Posted by Aled Edwards at 05:11 2 comments:

Today was just great. I travelled with Liz and John to Sonoma for a fundraising event arranged by some local volunteers for the Obama campaign.

John did a comedy piece and I said a few words about the European response to the American election. We were also given a fantastic dance. Everyone was welcoming and so kind. The weather was also brilliant. This America is warm and welcoming in more ways than one and I left Sonoma hugely encouraged.

I discern a great deal of nervousness among Obama supporters here in California that is matched healthily by a drive to work until the very last moment and to ensure that the campaign is well funded until the very end. I'll hold the good folk of Sonoma very much in my thoughts and prayers throught this campaign. I thank God for some new friends and a great day.

The whole event was supported by the fantastic singing of Elaine Lucia supported by her band. One of the band was of Welsh decent. His father is visiting Patagonia.

Others wanted to hear Welsh being spoken and I duly obliged. Finally, for those who are still interested in Sonoma, this is how you spell that slightly long Welsh place name:

From tomorrow on, I'll be doing some serious politics. Today, I just walked from San Francisco to the Golden Gate Bridge and began to make some more fantastic friends by phone, email and on the streets of San Francisco.

Lonzel, a field worker from the Obama for America campaign gave me his first official Obama supporter badge. I appreciated that. It's going back with me to Wales.
Posted by Aled Edwards at 05:12 No comments:

Today was fun but busy. I had one or two things to do in the office and also had a slot on Radio Cymru's Dau o'r Bae. That was a lot of fun.

I'm now on my way to San Francisco until November 7th. But I'll still be blogging my way through the American election. Bye......
Posted by Aled Edwards at 20:27 No comments:

The Best Holiday Ever

Today will be my last full day at work for quite a while. I'm taking my full set of fifteen days and going to California until the 7th November.

Late tomorrow night, I will be leaving Cardiff on a bus to begin my journey to San Francisco. This won't be the best holiday ever because I'm going alone and that will be strange. It will however be the most unusual break ever.

I'm going over really to enjoy the final two weeks of the US presidential election. I enjoy politics and I have prayed for both presidential candidates. I have been hooked for months.

This morning's third Presidential Election Debate marked a decisive turning point according to the pundits. I didn't particularly enjoy watching this morning's debate on CNN but I feel it was a paradigm moment in that McCain went on the offensive during the first twenty minutes. He may well have hoped that Obama would lose control under such pressure -he didn't.

During the early hours of this morning I thought that Obama - over three debates - had won the argument. The next two weeks will decide who wins the nation wide battle of the campaigns.

This is an American election for the American people. They alone should debate the issues with each other and the decision is theirs. I'll be over there as a foreign national and as a well behaved guest - I hope - in somebody else's home.

I'm looking forward to accompanying a nation during the final days of its own decision making. If appropriate and if asked, I'll share some of the reasons why others on the globe believe - by a ratio of some 4:1 - that Obama should be the next President.

The one thing I do know - whatever the result - history will be made on November 4th. It's going to be a very special holiday that allows a guest at someone else's table to share a special moment in history.

Whatever the result, I'll wish this nation well, and as a Christian, I'll continue to pray for those who lead it.
Posted by Aled Edwards at 09:36 2 comments:

I'm so proud tonight of Wales' footballers. The Under 21s did brilliantly last night to get a draw out of England away from home and we almost came back with a result from Germany. Alas, a brave effort was not enough.

I'm also beginning to get excited about going to California on Friday night. I hope Barack Obama does well in tonight's final debate. It looks good in the polls but it's going to be close.

I have decided not to go and play football tomorrow night. My brilliant dentist who had to put a screw in my mouth after last week's little incident when I landed on my head has encouraged me not to do anything daft until my mouth is fixed properly.

Some who know me might think that will take some time!
Posted by Aled Edwards at 21:55 No comments:

During the early hours of this morning I couldn't believe that John McCain referred to Barack Obama as "That One" - pointing to his opponent as one who had voted for an energy bill loaded with goodies for the oil companies. I don't think it was racist but it was certainly objectionable. It turned a human into an object. That's bad!

I don't think it will go away now either. Someone has already created a "That One" badge as a reminder. I noticed tonight that Obama, according to Gallup, has a 11% lead. That was before the "That One" debate.

Otherwise, I found the debate rather repetitive. I agree with CNN that McCain needed to win but didn't.
Posted by Aled Edwards at 19:19 No comments:

Hope for the Over Fifties 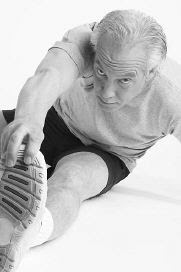 Sorry to be irritating about the thing but tonight I ran non stop for thirty minutes in the gym and rowed 5,000 meters. What's remarkable about that you may well ask?

I have never in my whole life been able to run for thirty minutes. I could sprint at school but only for some 15 seconds. This keeping fit stuff is really, really good. It also makes you really humble in a proud sort of way.
It gives me such a thrill to be able to do something at 53 that I could not do at 17 years old. To make life even better, I fit into the medium size Scarlets shirt my good wife got for my birthday. Gone are the extra large days - I hope. Mind you, I did try to sprint for 5 minutes and couldn't. Never mind, there's a lot of hope out there for the over fifties.
P.S. They will be electing a new Bishop of Bangor tomorrow. I'll pray for the electoral college and the man they chose. He might want to know how to run non stop for thirty minutes.

Posted by Aled Edwards at 22:17 No comments:

Today was a really nice day off to follow my birthday yesterday. I am now 53 years old, fit and happy. I did however eat far too much around my birthday.

Over the past 52 years I have worked with thousands of people. Most of them have, I trust, done a great deal of good. Some, especially from my Welsh speaking background went to prison for their non violent protests. I have also worked with pacifists who have broken the law because of their faith.

I dread to think what would happen if I was to be condemned for the things that others have done.

I tend to turn to CNN for the facts concerning the American election. This weekend, Sarah Palin attacked Obama for his brief political relationship with Bill Ayers, a founding member of the radical Weather Underground, which was involved in several bombings in the early 1970s, including attacks on the Pentagon and the Capitol. Obama was a child at the time of the bombings. I merely quote CNN's judgement on Palin's comments.

" Verdict: False. There is no indication that Ayers and Obama are now "palling around," or that they have had an ongoing relationship in the past three years. Also, there is nothing to suggest that Ayers is now involved in terrorist activity or that other Obama associates are."

According to the Western Mail today, when Lord Coe and the British Olympic Association, in breathtaking arrogance, insisted that they are going to proceed with a "Team GB" football team - despite the the totally appropriate opposition of the FA's of all the Celtic nations - it was alleged in a London newspaper that he said of the Celts "F*** 'em".

I am not really bothered whether he said it or not. The intention to proceed with "Team GB" football amounts to the same thing whatever the language used.

The whole thing made me sin a lot this morning. Every time I picked up The Western Mail the really naughty part of my brain kept adapting a bad joke that was once applied to John Redwood when someone from London thought he was the most appropriate person in the UK to be Secretary of State for Wales.

If it were asked by Lord Coe "Why do people in Wales and Scotland take an instant dislike to me?" the answer is simple: "Because you used to run quickly and because it saves time."

I know that I have to forgive him and not to be nasty. I'd just find it much easier if he left my beloved Wales football team alone!

P.S. I was good tonight on the football pitch. Apparently, I came close to doing a two legged tackle on a friend last week. What's scary is - I didn't notice.
Posted by Aled Edwards at 22:36 No comments:

Aled speaking at an Obama for America event in Sonoma, California 2008.